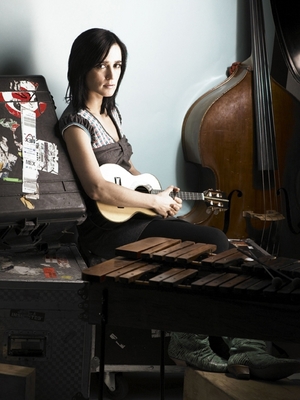 To speak about Julieta Venegas is to talk about a great songwriter who is both loved in Mexico as well as internationally acclaimed. She has been honored on different occasions and received important awards from the international musical industry.

Julieta Venegas has been recognized as a musician and singer-songwriter, for her professionalism and for the quality of her performances. She has been nominated several times, in different categories, for the Grammy Awards, the Billboard Awards, the Lo Nuestro Awards, and on more than one occasion has walked away a winner at the MTV Latin American Awards and Latin Grammy Awards Ceremonies.

With the release of “Julieta Venegas MTV Unplugged.”, Venegas now has a new and different opportunity for presenting her music. An entirely acoustic album, performed in a intimate atmosphere, close to the audience, the project was recorded on the night of March 6th at the Churubusco Studios in Mexico City. This marks the twentieth MTV Unplugged show for MTV Latin America.

This album was created in an acoustic space; where this Tijuana native tried out new songs, as well as performed some of her best known work live.

“Julieta Venegas MTV Unplugged” fuses a mix of electric rhythms and harmonies by integrating different instruments like the tuba, clarinet, xylophone, flute and a string quartet, producing new versions of some of her classic material such as “Limón y Sal”, “Lento” and “Me voy”. It also includes her new songs: “El presente”, “Algún día”, “Mira la vida” and “Ilusión”.

“I feel that this show is a significant step, not only because of what Unplugged represents, but also for what it means to me musically,” commented Julieta Venegas. “I even think it will even change the direction I’m headed in, because it was just an amazing experience!” added Venegas.

Julieta Venegas has had great achievements and recognition throughout her career; among them are the following:

- Winner of a 2004 Latin Grammy Award for “Best Vocal Rock Album” and a 2006 Latin Grammy Award for “Best Alternative Music Album”.
- She was the artist with the most awards at the “MTV Video Music Awards Latin America 2004”: “Artist of the Year”, “Best Solo Artist” and “Best Mexican Artist”.
- Winner of 2004 Oye Awards in the categories of “Best Spanish Rock Album”, “Song of the Year” (Andar conmigo) and “Album of the Year” (Síx).

- Nominated for a 2005 International Grammy in the “Best Latin Alternative Rock Album” category, as well as for the Lo Nuestro Awards and for the Lunas de Auditorio Nacional in different categories.
- Winner of the 2006 MTV LA Awards as “Best Solo Artist or Singer”.
- Winner of the 2006 Latin Grammy Award for “Best Alternative Music Album”.
- Winner of the 2007 Latin Grammy Awards for “Best Latin Pop Album” for “Limón y sal”.
- Nominated for the 2007 Latin Billboard Awards in the “Pop Album of the Year”, category for “Limón y sal”
- Nominated for the 20007 Lo Nuestro Awards for “Female Artist” and “Video of the Year”.
- Winner of the 2007 MTV LS Awards in the “Best Northern Artist” category and nominee in the “Best Pop Artist” category.
- In 2008, she received a nomination for the Lo Nuestro Awards as “Female Artist of the Year”.
- Her album “Sí” was at the top of the Amprofono charts for most sold albums, for over 57 weeks; this effort was also on the Mix Up charts for over 30 weeks. The single “Andar conmigo” stayed in the top spot on Mexican radio for more than 15 weeks.
- She received numerous honors in different countries for her album “Sí”, as well as having exceeded regional sales by 550,000 copies.
- Sales of her “Limón y sal” album surpassed the 850,000 level worldwide; as well as receiving important certifications going platinum in Mexico, Spain and Argentina, and gold in Central America, Venezuela and Italy.
- She has collaborated on albums of renowned music figures, such as the latest work of Diego Torres, Vicentico and Coti Sorokin. She has also participated in albums with numerous international celebrities such as “Homenaje a Pablo Neruda” and “Entre todas las mujeres” (A tribute to Joaquín Sabina), among others.
- During the last few years, she has given successful concerts in Mexico, as well as in the U.S., Argentina, Colombia, Chile, Peru, Spain and Italy, among others.